You Owe Her an Apology 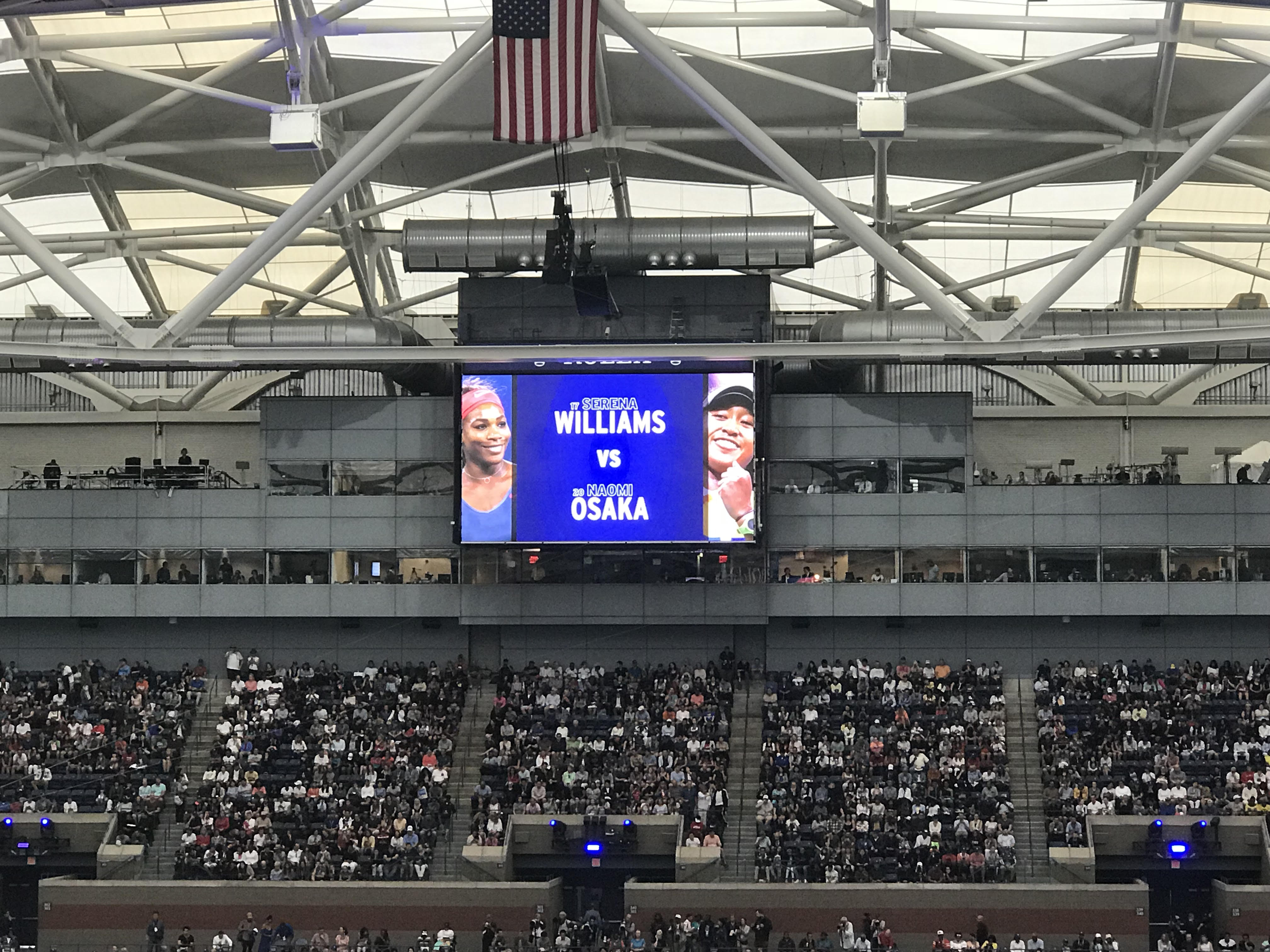 When I was deciding what outfit to wear to the US Open today to see my favorite athlete of all-time vie for her 24th Grand Slam title, I knew I wanted to make a statement that both felt of-the-moment and of-Serena. So I settled on a Nasty Woman t-shirt (hey, Sam Bee) and a Nevertheless She Persisted necklace (shout out my bestie J-Will). Little did I know how prophetic those clothing items would be…

This is not the first time I’ve written about Serena Williams for DTM, and it probably won’t be the last. She’s the greatest tennis player to ever play the game, she’s the greatest athlete of a generation, she’s a champion through and through. She’s also human – and that might be the thing I love most about her.

Growing up as a young female sports fanatic and athlete, I had a knack for emotional “outbursts.” Anyone that knows me can tell you I show my emotions on my sleeve – it’s something coaches, teammates, family members, and many a referee would tell me to reign in. I was t’d up too many times to count; I’ve had beer thrown on me at a baseball game for being too loud. So in and out fo the sports world, the messages have always been the same. Don’t cry, Stephi – bosses shouldn’t see me cry, new beaus shouldn’t see me cry, doctors shouldn’t see me cry. I apologize for crying. Don’t yell, Stephi – I shouldn’t raise my voice in the workplace, I shouldn’t argue with new love interests, I shouldn’t question doctors – they know best. I apologize for raising my voice. But looking back, I know it wasn’t always me who needed to apologize.

Serena has always been derided as too emotional, too disrespectful on the court. Two years ago, Hillary Clinton was called a “Nasty Woman” by D***** T**** for arguing passionately for tax reform that would tackle debt and entitlements. Women have always been told that showing emotion in a professional setting is poor form – we look mentally weak, it’s a sign we’re not capable of handling our duties. But if someone calls our character in question, if someone threatens our livelihood, if someone over-penalizes us for no logical reason, we’re just supposed to sit back and take it?

I’ve never loved Serena more than I did today when she emphatically argued the unfairness of the whole situation to the USTA officials who came onto the court. Through tears, she claimed that calling the chair ump a “thief” wasn’t nearly as vulgar as the terminology used by some of her male counterparts. She’s right. To be penalized a full-game for verbal abuse in that instance was entirely unfair and embarrassing. Not just for the chair umpire, but also for Serena who has fought tirelessly to defeat the angry black woman label that has followed her for years. I’ve heard it constantly, from “friends,” co-workers, family – she’s too angry, she’s too volatile, she’s not as composed as the other women. But every time Serena reacts rawly on the court, I love her more – she is and has always been 100% herself out there. It is amazingly refreshing to see a woman out there dominating her profession, having proven herself the ultimate champion in every which way, still willing to show true emotion, to fight for what’s right, no matter the price.

As I watched her at the end of today’s match, a few things hit me all at once. The first was my utter angst at the thought of all the stupid hot takes people (men & white women) would have, bringing back that label Serena has fought too hard to remove from public discourse. My second thought was how it will be very telling what male tennis players come forward in Serena’s defense (as of posting time, only Andy Roddick, and he doesn’t even play anymore). My third was how sad this whole situation is for everyone – Naomi, Serena, the USTA, the US Open, and even for me & the rest of the fans. Naomi deserved to win that match, but her sadness was evident as everything unfolded. The fact that SHE was the one apologizing on the podium is some utter bullshit. Serena’s grace in defeat was sad as it always sucks that women (especially black women) must shoulder the responsibility to “go-high” as Michelle Obama says. Sometimes, that’s also some utter bullshit (no offense, MObama, still love you).

My fourth and final thought as I watched her up there is how I know that Serena will nevertheless persist. Not just for herself, but for every woman who wants to show emotions on the court, who wants equal pay, who wants equal treatment from umpires. This is not going to defeat her, this is not a step back. If anything it will make her stronger (if that’s even humanly possible).

In her post-match interview, Serena said:

“But I’m going to continue to fight for women, and to fight for us to have equal – like Cornet should be able to take her shirt off without getting a fine. Like this is outrageous. And i just feel like the fact that i have to go through this is jut an example for the next person that has emotions and want to express themselves and they want to be a strong woman. And they’re gonna be allowed to that because of today. Maybe it didn’t work out for me, but it’s gonna work out for the next person.”

I think I’ve alway felt flawed for being too emotional – it was something I needed to work on, something in myself I needed to fix. I catch myself apologizing for crying when I know I shouldn’t need to. I catch myself apologizing for raising my voice, when in reality impassion is being confused for yelling. But Serena showed me today how emotions are a sign of strength, a sign of passion, a sign of honesty, a symbol of humanity. Today, she doesn’t owe anyone an apology – but so many of us owe her one. Not just for the bullshit of today, but for forcing her to carry this burden, for not believing her when she knew her own body, for the racist and sexist vitriol she has to read online and in the press, for her male counterparts who are too afraid to stand by her side. I am sorry, Serena Williams. Just know I love you today, and always.