Why You Should Mourn That Celebrity You’ve Never Met

By now, you know the drill. A singer/ actor/ athlete dies, maybe one you loved and idolized. Amidst dozens of Facebook posts from friends expressing shock and grief, there’s a post from that one friend who’s like, “I don’t understand why everyone’s so upset, you didn’t even know [insert name].”

This is for everyone who expresses shock and grief, and maybe for that one friend, too.

I learned of Whitney Houston’s death while on my way home for a funeral. I hadn’t cried all day — the funeral was for a cousin of the person I was dating at the time, and I was trying to be strong for her, whatever that means. But when I heard the news about Whitney, I felt like I’d been slapped, in a way that was different from the death of someone I’ve known personally. 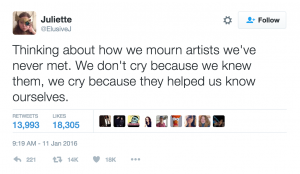 I would go even farther. Artists, musicians, actors, athletes – they don’t just help us to know ourselves. They show us what is possible. We cheer their games, fall in love to their songs, pattern our hairstyles after theirs. Their music supports us through hard times, buoys us in happy ones. We invite them into our homes, watch them fall from grace and (hopefully) get back up again. Some like Prince, Bowie, and George Michael give us new visions for masculinity. Some like Robin Williams and Carrie Fisher inspire us to fight our own battles through the grace and humor they display fighting their own. Some like Sharon Jones and Gwen Ifill speak to us from our televisions with the warm familiarity of a family member.

There isn’t a finite amount of sadness in the world. (If there were, my emo ass would have exhausted it in 10th grade.) You can mourn Prince and Alan Rickman and Aleppo and your brother and your best friend’s dad all at the same time. One doesn’t diminish or take the place of the others. So please, go ahead and mourn that celebrity you’ve never met. There’s enough grief to go around.