Waiting to Exhale: The American Story 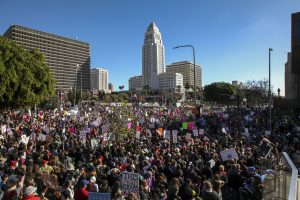 Source: LATimes.com
We’ll get up off the ground

The Women’s March on Washington, Los Angeles edition, was so crowded that my sister, mother, nephew, college friend, her friend, and all of our sisters and mothers and comrades in arms couldn’t march. We stood half a block from Pershing Square, from 9:40 AM until just after 11:00 AM, standing in place. As we looked around, we pointed out clever signs, noted unique shows of protest, and generally marveled at the wonder of women. Every version of woman and human was out there, fired up and ready to go.

Emotions at a march are a weird thing. I first felt it when I marched right after the election. This call and response had me behind sunglasses because I’m not crying you’re crying:
Women: My body! My choice!
Men: Your body! Your choice!

I feel almost embarrassed to admit that merely hearing a truism affirmed makes me well up. But it seems so rare these days to hear this consensus: that a human is fully self-possessed and free.

It happened again when I looked around the Women’s March yesterday, at signs that said “I’m with her” with arrows pointing in every direction or that listed names of women who have paved the way for us ending with “You” or “Still I Rise.” Yet I knew these to be true, too.

I had started the day with Instagram stories from friends in Paris, Philadelphia, New York, Washington, D.C., and London. I knew we were in it together. But later, on the drive home, seeing footage compilations like this one or this map of millions of women coming together around the world to stand up for ourselves and for others is what really got me. After too many months of gaslighting from the 45th administration telling us that the silent majority is not with us, that we need to retreat from change, and that the truths we hold to be self-evident are not valued, every one of us out in the streets was reminded that this is what America is about. We are the reminders. Our bodies, our selves.

There is an essential humanity that America was created to fight for and protect. Yes, we didn’t get it quite right the first time with slavery and women and then we kind of bungled Japanese immigrants/citizens and there really is neither time nor space enough to list every demographic that we have wronged/continue to wrong, but the majority of Americans remain focused on progress, future, forward movement. (“Left? Right? What about Forward?” was another sign I loved.)

The reason “The Future Is Female” is because the only way citizens can create a sustainable future is to incorporate both sides of the spectrum and every spot along it. The footage of millions of women (and men!) around the world coming out reminded us that they, too, know what America represents, what is indeed written on our Statue of (Lady) Liberty:

“Keep, ancient lands, your storied pomp!” cries she
With silent lips. “Give me your tired, your poor,
Your huddled masses yearning to breathe free,
The wretched refuse of your teeming shore.
Send these, the homeless, tempest-tost to me,
I lift my lamp beside the golden door!”

America does not look to the past. We aren’t looking to proclaim our victories either. Rather, we humbly seek to create a future inspired by what we have always done to make America great: creating a home where all can exhale. Take refuge here, we say. We lift our lamp to be a model for others. Not to make America first or better than everyone else, but to bring others with us, to bring the world towards equality.

By now it’s become apparent that the way that this administration will measure success is through numbers, Nielsen ratings, and cheering sections. So yesterday I turned on Fox News to see what the coverage would be of the marches, which were every news story on MSNBC, CNN, Twitter, the New York Times, and what I just learned people call the “MSM.” The Five was not talking about it at all. While they waited for the first White House briefing of Trump’s administration, they called liberal responses to Trump’s election “mass hysteria.” (They also pointed out that he hasn’t done anything yet so give him a chance because I guess the last 30 years of his public career don’t matter. But I digress.)

Back to CNN I flipped to watch the press briefing. Sean Spicer eventually came out to talk about two tweets, undermine news media and journalists, and surprisingly use “period” in a positive way before leaving the stage. As he left, a female reporter called out from offscreen, “the Women’s March..?” to no response.

According to this administration, we do not exist. We are not worth comment. And neither are our concerns.

Let us not forget the first stanza of the poem (ahem–written by a woman) etched on Lady Liberty:
A mighty woman with a torch, whose flame
Is the imprisoned lightning

Yesterday was but the first glimpse of our inner lightning. There is more to come.