The Reckoning is Terrifying

I can’t stop thinking about Rebecca Traister’s amazing piece in NY Mag about the so-called “reckoning” that is happening post-Weinstein. I would never do her the disservice of trying to paraphrase or cause you to not read it, so please, yes, read this piece. Sit on it like I did. It is harrowing and thoughtful and important and real. Here is the link again: https://www.thecut.com/2017/11/rebecca-traister-on-the-post-weinstein-reckoning.html

But there is a particular section of that piece that I wanted to expand upon. Towards the end of the piece, Traister notes the backlash for these reckonings has already started brewing:

“A powerful white man losing a job is a death, and don’t be surprised if women wind up punished for the spate of killings. Many men will absorb the lessons of late 2017 to be not about the threat they’ve posed to women but about the threat that women pose to them. So there will be more — perhaps unconscious — hesitancy about hiring women, less eagerness to invite them to lunch, or send them on work trips with men; men will be warier of mentoring women.”

I’ve already written about how the #MeToo campaign epitomized this notion that it is somehow our responsibility as the perpetrated to fix the problems enacted by our perpetrators, i.e. men, but this so-called reckoning is that on a much larger, much more dangerous scale. Breitbart recently sent a slew of its so-called reporters to Alabama with the sole purpose of discovering information that would help discredit the women who accused Roy Moore of sexual assault. After the Louis C.K. allegations came out, one prominent male reporter questioned what was so bad about his actions. Many-a-senator’s response to the Roy Moore allegations was to note that only “IFFF they were proven true, then he should step aside….” The worst, though, are the growing number of people who think the Mike Pence strategy (do not be alone with a woman who is not your wife/Mother/wife-you-call-mother) is the right move. I seriously feel like I have momentary heart palpitations every time I read another take that leans in that direction: 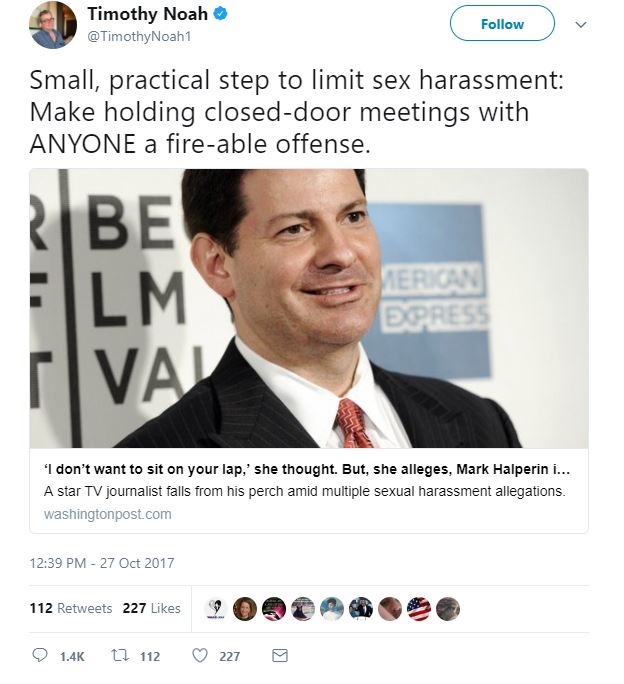 See, and here’s where I feel like I have to repeat myself – if being in a room alone with a woman is so difficult for you that you do not think you can refrain from, oh, I don’t know, sexually harassing her, then this is most definitely a YOU problem, not a her problem.

Don’t get me wrong, I am loving the dragging of terrible men, but it comes at a cost. Selfishly, I am so terrified of how this will impact me, specifically in my work place. I am terrified of how this will impact my friends in their workplaces. We are already making 79 cents to every dollar a man makes (let alone women of color who are making 6 f*cking 7 cents) – do we really need men questioning whether or not to mentor us, to put us on a project, to include us in meetings, to invite us to business events because they’re trying so hard to protect themselves from a reckoning? Even men who think they’re for women – the “He for She” category, aren’t always who they say they are and can be oblivious in their complacency or worse active participants.

I dated a guy for a few months who considered himself an outspoken feminist, but would not hesitate to complain about a female boss as being “bitchy,” “just not a nice person,” “with a voice that is pretty annoying – but it’s not because she’s a woman, it just is.” The other day, Conan O’Brien tweeted “I’m ready for the all-female reboot of America.” But in analyzing Conan O’Brien’ writers room, Conan’s top 24 writers (by episode count), include only 4 women, none of whom crack the top 5, and two of whom are in the bottom 3. Louis C.K. released a statement admitting to the accusations detailed in the NYT piece, but a. did not apologize and b. felt the necessity to mention not once, not twice, not thrice, but FOUR TIMES how much the women “admired” him. Joe Biden struts out there like Barack’s BFF and your cute grandpa, but then you remember he stared down Anita Hill as she begged for any man across from her to listen to her story and take her seriously, and his response was to refuse to listen to testimony from multiple corroborating witnesses.

Women are at such a disadvantage. I applaud, so loudly, the women who come forward, the women who put their careers on the line to speak the truth. But I also understand the necessity to keep quiet – to keep your head down, to ignore the small slights and the nuanced language, the awkward touches and the uncomfortable glances. Because how else do I create change? I can’t get to power if I don’t have a job. I can’t create change if my bosses refuse to promote me, refuse to give me feedback, refuse to speak to me because they are so afraid I might scream “sexual harassment.” This might be a reckoning for some, but for many of us it’s a ruse – designed to trick me into false hope as more obstacles are strewn in my path to career and personal success.